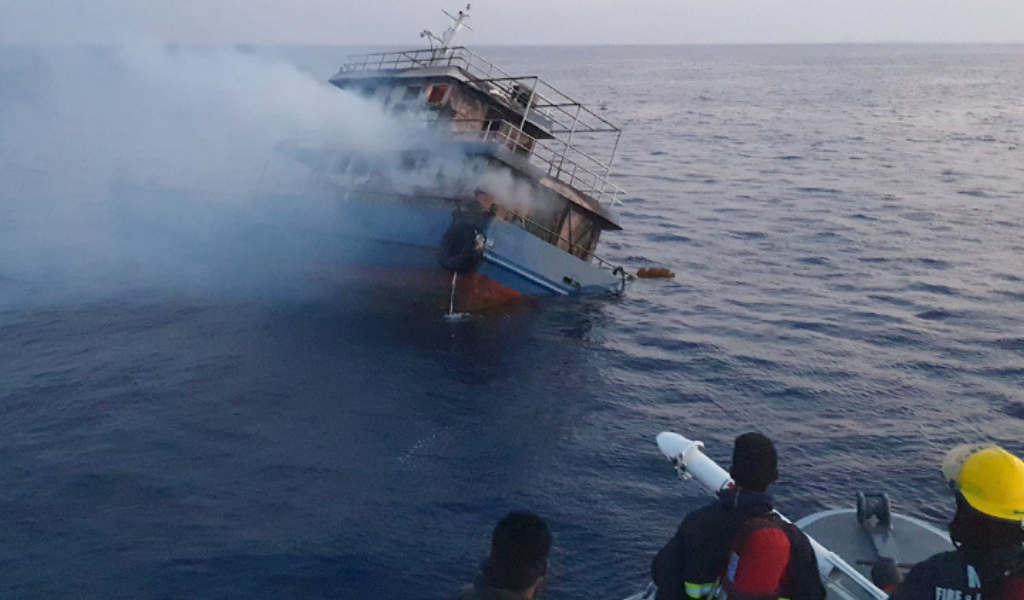 Capsized Oil Barge Currently Underwater With 60,000 Liters Of Diesel Poses No Threat As Of Yet

On Saturday, a fire broke out on an oil barge – ‘Sea Star’ that is owned by the company ‘Bro Fuels’ - which was en route to Laamu Atoll from the Male’ City, consequent to which it has sunk near Enboodhoo Finolhu in Kaafu Atoll.

During a press conference held jointly yesterday by the Maldives National Defense Force’s Coast Guard and the Environmental Protection Agency (EPA), Commandant Colonel Mohamed Saleem stated that the barge has sunk to a depth of 1,000 to 1,400 meters underwater – carrying 60,000 liters of diesel with it. Although some signs of diesel were detected in the area yesterday morning, it had evaporated most likely due to sunlight.

Apart from that, no indication of an oil spill has been detected in the area following surveys conducted by authorities – meaning that no real danger is posed from the sunken oil barge so far.

The Director General of EPA, Ibrahim Naeem, further explained that diesel was a very volatile fuel and evaporates soon after being exposed to the air and so posing little danger. The only danger was if the spill occurred onto a reef. In this regard, Colonel Saleem notes that the incident would have been treated as an oil spill had it involved heavy oils.

Authorities remain undecided on whether to resurface the barge or not. However, Colonel Saleem notes that only a few nations had a capability of salvaging a vessel locates so deep – hence does not seem like a cost-effective thing to do.

Whilst the area still remains under close monitoring for an oil spill, authorities assure that they ready to take action in a circumstance where there is one noting that the Japanese government has recently donated equipment that can be used in such circumstances.

Bro Fuels estimates a loss of MVR 10 million due to the incident.