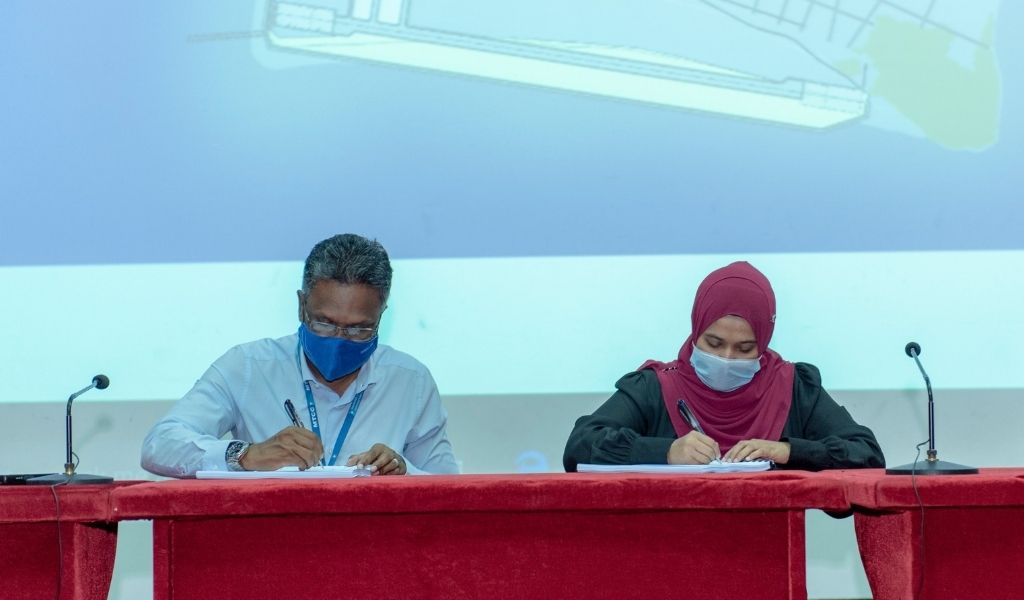 On Sunday, the Ministry of National Planning, Housing and Infrastructure has contracted Maldives Transport and Contracting Company Plc (MTCC) for a project that is valued at MVR 221.773 million: The Design and Built of an Airport At Muli in Meemu Atoll. A special signing ceremony was held in this regard where the agreement pertaining to the project was signed by the Director-General, Ms. Fathimath Shaana Farooq, on behalf of the Ministry, whereas the CEO of MTCC, Mr. Adam Signed, signed for them.

This project compromises of work involving the reclamation operations of 14 hectares; coastal protection operations of 1,812m; construction of a 1200m x 30m runway; taxiway and an apron. As per the agreement, MTCC must complete the project within 265 days.

Speaking at the ceremony, the Minister of Planning, Housing & Infrastructure notes that the airport is being developed as part of the current administration’s pledge to have an airport within a thirty-five-minute distance from each island of the Maldives. Furthermore, Meemu Atoll is more geographically isolated in comparison to other atolls in the country.

At present, Maldives has three international airports and fourteen domestic airports across the country. Whilst several additional airport development projects are underway, the government has also recently announced for interested persons to submit bids for the development of four airports in the islands: Thulhaadhoo in Baa Atoll, Bilehfahi in Shaviyani Atoll, Vilufushi in Thaa Atoll and Makunudhoo in Haa Dhaalu Atoll.