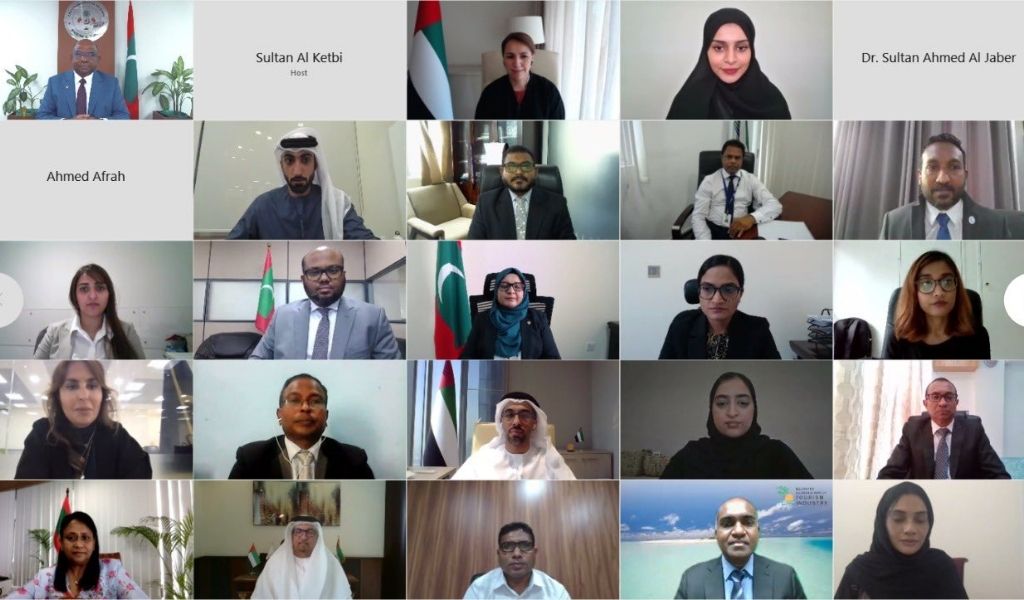 In participation with stakeholders from the government and the private sector of the Maldives and the United Arab Emirates (UAE), an inaugural Joint Committee Meeting was held virtually yesterday. On behalf of the Maldives, the Minister of Foreign Affairs, Dr. Abdulla Shahid chaired the meeting whereas the Minister of Industry and Advanced Technology, Dr. Sultan Al Jaber, and the Minister of State for Food and Water Security, Ms. Mariam Almheiri chaired on behalf of UAE.

Speaking at the ceremony, Minister Shahid highlighted that the relationship between the two nations was founded on mutual respect and shared values, with stress on the increased engagement in recent years in international and regional organizations such as the United Nations, where the Maldives and UAE partners on key issues such as climate change. He also expressed the commitment to expand cooperation bilaterally, internationally, and through the advancement of trade, investment, and economic partnerships.

On behalf of the UAE, Minster Sultan also relayed the keenness of UAE to expand and explore new avenues for investment and collaboration with the Maldives, including the sharing of expertise and best practices in different sectors. Minister Mariam expressed the intention to undertake an official visit to the Maldives to consolidate cooperation between the two countries in the field of food security, as she sees great potential for it.

Diplomatic relations were first developed between the countries on 15th March 1978. The meeting concluded with both nations reiterating their commitment to exploring opportunities for cooperation in areas of mutual interest. These include economic diversification, food security, investment, health, environment, defense, security, infrastructure development, transport, education, culture, youth and hospitality.

Prior to this meeting, parties from both countries met up virtually from 8th February to 9th February, to facilitate in-depth discussions at a technical level in preparation for the Joint Committee Meeting.