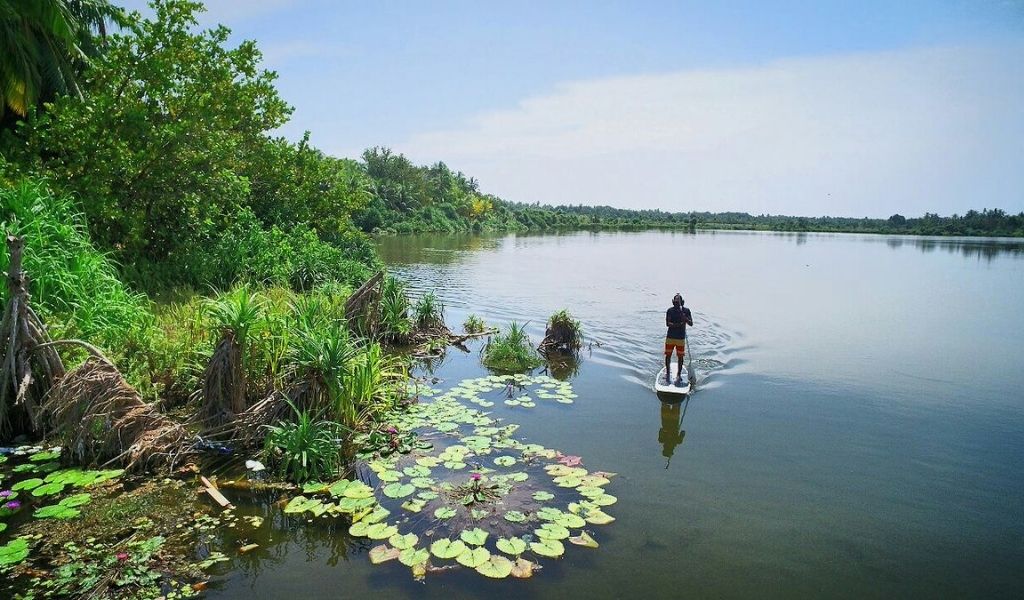 Wetlands are land areas that are saturated or flooded with water either permanently or seasonally. Inland wetlands include marshes, ponds, lakes, fens, rivers, floodplains, and swamps. Coastal wetlands include saltwater marshes, estuaries, mangroves, lagoons and even coral reefs. Fishponds, rice paddies, and saltpans are human-made wetlands.

Every year, on the second day of February, World Wetlands Day is marked to raise global awareness about the vital role of wetlands for people and our planet.

Amongst the over thousand islands comprising the Maldives, an estimated 41 islands boast majestic wetlands. Our islanders have been heeding the benefits of these wetlands for centuries thus Maldivians have a complex and dynamic relationship with this nature’s gift. These wetlands help us cope with extreme weather and they provide habitat for animals and plants and many contain a wide diversity of life, supporting plants and animals that are found nowhere else. Thus, it is of utmost priority that we must conserve them in a sustainable manner.

Accordingly, here are some ways our forefathers and previous generations engaged on wetlands sustainably, understanding the importance of conserving this environment way before we did.

Kulhudhuhfushi in Haa Dhaalu Atoll
Black mangrove which is locally known as ‘burevi’ is a bit of an invasive true mangrove species. On this island, these were extracted as firewood in a controlled manner. But, firewood collection was only permitted at certain times of the year in addition to also being restricted to certain areas. As a result, up to this day, Kulhudhuhfushi has the densest black mangrove forests in the country, inclusive of mature and old trees.

Baarah in Haa Alif Atoll
Red mangrove trees which have slender and tall trunks were cut down in this island to build houses. For every red mangrove tree which was cut, several more were planted. Furthermore, cutting down really old trees was prohibited and also cutting was restricted to selected areas.

Neykurandhoo in Haa Dhaalu Atoll
Kandoo, the propagule or fruit of the small-leafed orange mangrove, was consumed as a staple food. Nevertheless, Kandoo could only be collected on Saturdays for a period of two hours after the Island Chief blows a conch. To prevent over-extraction, collection from core areas and sweeping of the forest floor were prohibited.

Fiyoree in Gaafu Dhaalu
At the beginning of the ‘Halha’ season, there is an inflow of salt water into the wetlands from sea surges. Locals in this island set up groups to control the inflow of salt water. The excess water collected was let out carefully during two or three nights, with them switching between shifts and staying awake. Controlled salinity allowed taro to be cultivated, and draining ensured that excess flood water was let out through this friendly flood control system.

On the other hand, mud was removed by dragging “kashikeyo” (pandanus) crowns.

Kendikulhudhoo in Noonu Atoll
The mangrove forest is connected to the lagoon during the ‘Halha’ season allowing milkfish to lay their eggs. Mud is removed during this period.
These are some of the amazing ways in which our past generations engaged with wetlands. However, our lifestyles have changed with times. What has not changed however, is the value of these wetlands.

Mangrove ecosystems provide many regulatory services. They act as water sinks and help control flooding of our islands during heavy rain and sea surges. Evidencing this, the effects of the great tsunami in 2004 was also felt less in islands that harbor wetlands such as mangroves and marshlands. They help control sedimentation and are in symbiosis with the reef ecosystem, the bedrock on which the existence of Maldivian islands depends. Numerous fish and marine organisms spend a part of their juvenile life in wetlands. The tree roots protect them from large predators. These same tree roots, which are highly adapted and often above the ground, stabilize the soil and act as a barrier to coastal erosion. As mangrove ecosystems act as water sinks and prevent saltwater intrusion, they help regulate the groundwater lens by helping it replenish and by preventing contamination.

Sadly, in recent years we have witnessed large scale die-off of mangrove forests in many islands in addition to other environmental impacts across the many other wetlands. Hence, this is high time we put the greatest efforts possible to protect this nature’s gift and what better day than today to start.