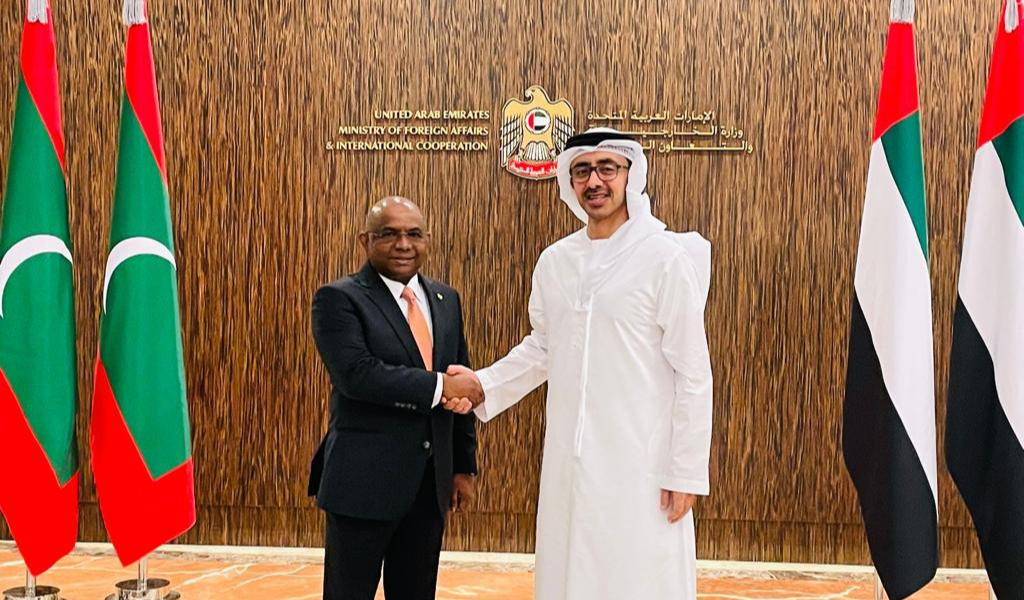 Yesterday, Minister of Foreign Affairs of Maldives, His Excellency Abdulla Shahid met with Minister of Foreign Affairs of the United Arab Emirates (UAE), His Highness Sheikh Abdulla bin Zayed Al Nahyan. As a Special Envoy of President Ibrahim Mohamed Solih, Minister Shaid handed over a letter from the President addressed to this His Highness Sheikh Mohammed bin Zayed Al Nahyan, President of the UAE.

During the meeting, Minister Shahid conveyed greetings and well wishes from the President to the leadership of UAE and the Emirati people. Afterwards, the two ministers spoke on ways to further strengthen and diversify the long-standing relations between the Maldives and UAE. On this note, Minister Shahid expressed his gratitude to the Minister for the generous support facilitated through the Abu Dhabi Fund for Development. In this regard, he thanked the UAE for their invaluable contributions to the socio-economic development of the Maldives throughout the years.

Furthermore, the two Foreign Ministers also discussed areas of mutual interest and renewed their commitment to explore avenues together both in the international fora and in bilateral matters. The Foreign Minister was accompanied at the meeting by a delegation of Maldivian dignitaries. This includes the Ambassador of the Republic of Maldives to the United Arab Emirates, Her Excellency Aminath Shabeena, Assistant Director at the Ministry of Foreign Affairs, Ahmed Salman Zaki and Second Secretary of the Embassy of the Republic of Maldives in the United Arab Emirates, Fathimath Urooj Nizar.