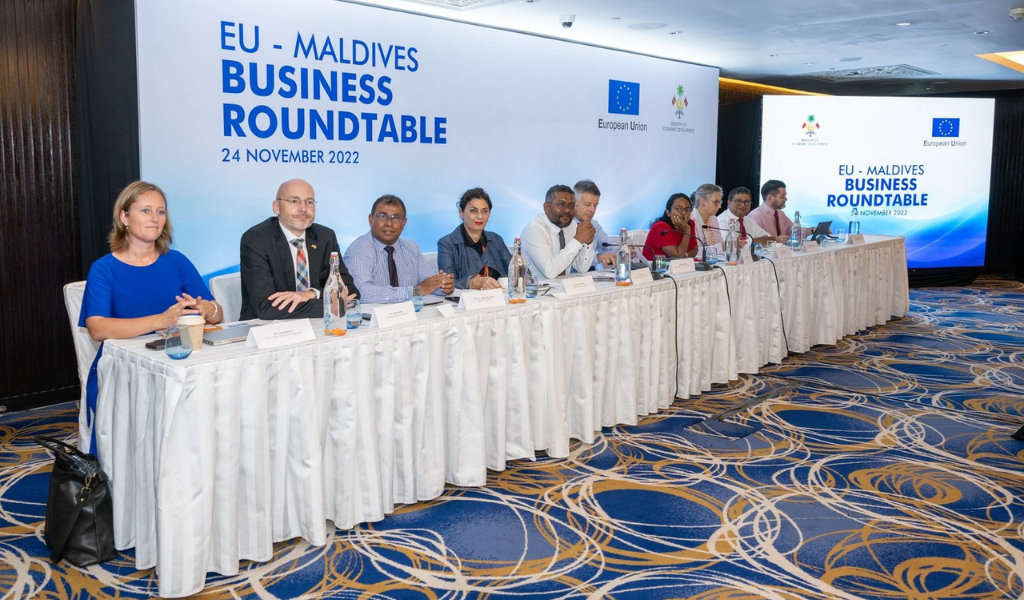 The Ministry of Economic Development has collaborated with European Union (EU) and co-hosted the second edition of the EU- Maldives Business Roundtable at Hotel Jen, Male Maldives. The session formed part of the Government of Maldives’ efforts to promote investment opportunities in the country and further explore avenues for partnership and cooperation between EU and the Maldives on economic matters.

The Maldives Business Roundtable was graced by notable dignitaries from the Maldivian cabinet including the Minister of Economic Development, Fayyaz Ismail, Minister of Environment, Climate Change & Technology, Aminath Shauna, Minister of Tourism, Dr. Abdulla Mausoom and the Minister of Fisheries, Marine Resources & Agriculture, Dr. Hussein Rasheed Hassan. The delegation from the EU comprised Ambassador Denis Chaibi together with Ambassadors from Germany, Austria, Italy, Romania and the Netherlands. Moreover, a selected group of representatives from the European and Maldivian business markets also attended the session.

During the opening remarks of the session, Ambassador Denis Chaibi spoke on the appeal of the Maldives as an investment destination and encouraged European businesses to make the optimum use of the opportunity to gain insight into the Maldives’ offers on investment. In his turn, Minister Fayyaz reflected on the strong pro-market policies incorporated into the country’s investment framework. He also noted that the Government of Maldives is seeking the private sector to occupy a greater role in the economic development of the country. In this regard, he urged the EU to take into consideration the various options for granting duty concessions for the Maldives on fish exports.

At the session, presentations were delivered highlighting the country’s economic vision and the numerous opportunities for investment. The EU Green Deal was also spotlighted and the ongoing and future support for a green recovery by the EU was underscored. In addition to this, a panel discussion was held during the session which facilitated businesses and policymakers to network and conduct interactive engagement. At the panel discussion, an opportunity was given for EU businesses and Maldivian businesses to present their inquiries and provide suggestions on efforts to further strengthen business ties between the two parties.