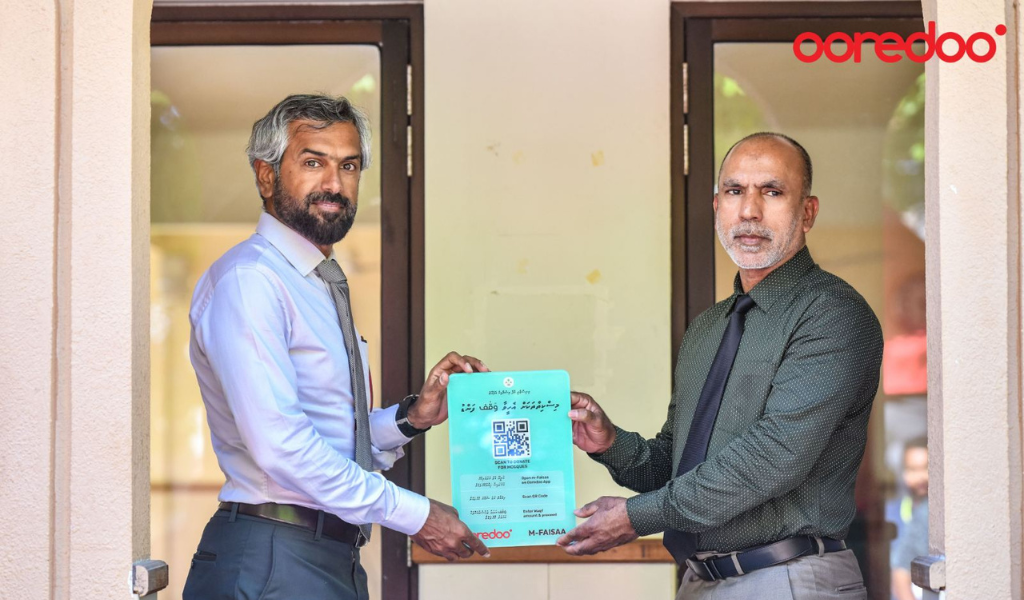 Yesterday, Ooredoo Maldives announced that they have collaborated with Ministry of Islamic Affairs to enable donations to be made to the Waqf Fund through m-Faisaa. The Waqf Fund was established with the aim of raising fund to finance different renovations and development projects at mosques.

A special ceremony was held in Masjidul Inara in Himmafushi island to inaugurate the service. The ceremony was attended by the Minister of Islamic Affairs, Dr. Ahmed Zahir Ali and the Chief Executive Officer (CEO) & Managing Director (MD) of Ooredoo Maldives, Mr. Khalid Al Hamadi. Other senior dignitaries from the Ooredoo management as well as island authorities also took part in the inauguration.

Speaking on the Ceremony, CEO & MD of Ooredoo Maldives, Khalid Al Hamadi said “At Ooredoo we always work towards building our communities and facilitating development by leveraging on our resources. Waqf funds around the world are one of the mot sustainable sources of funding for charitable causes. To we are delighted to support the Waqf Fund established by Islamic Ministry to enable people to make donations conveniently via m-Faisaa.

Minister of Islamic Affairs, Dr. Ahmed Zahir Ali remarked that many people want to make donations for maintenance and development of mosques across the nation and the Ministry has always strived to provide convenient ways to deposit funds to Waqf. He added that it would be of great convenience to the people to be given the opportunity to assist mosques through Ooredoo m-Faisaa service.

Customers can now easily donate to the Waqf Fund by scanning the QR code placed at mosques via m-Faisaa on Ooredoo App. During the inauguration, the first QR code was placed at Masjidul Inara, K. Himmafushi with many other mosques following in suit soon.

In an effort to enrich the lives of people further, Ooredoo Maldives has partnered with multiple government bodies, NGOs and foundations to provide easy and secure routes for donation. This includes Cancer Society, Maldives Deaf Association, Kudakudhinge Hiya and many more.