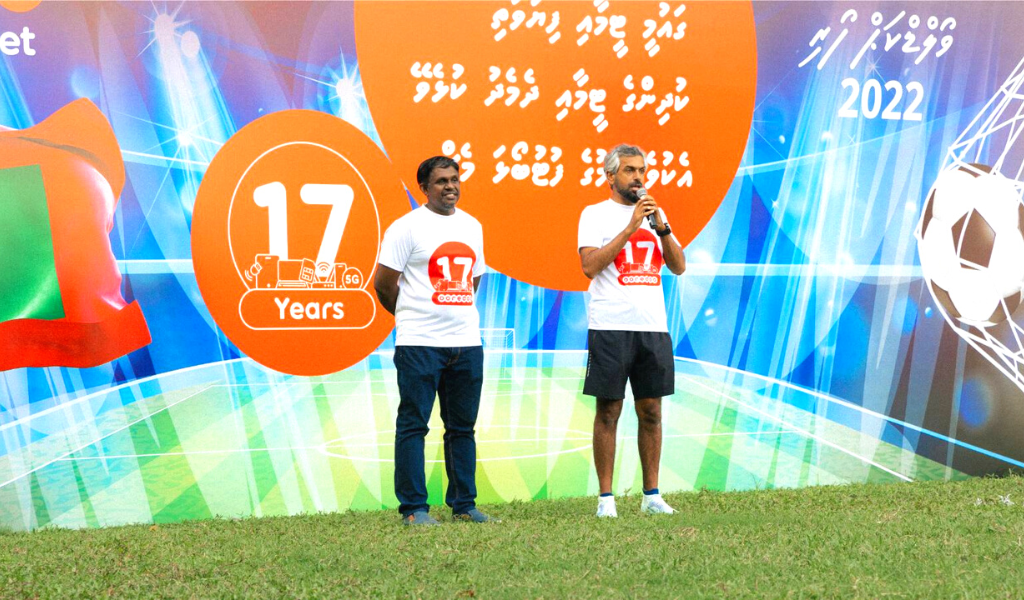 Ooredoo Maldives Kick-Starts Its Anniversary Celebrations With A Fun Evening of Football!

This week, Ooredoo Maldives celebrated its 17 years of service and what better way to start up the anniversary fiesta other than a good old game of ball! With the World-Cup spirit lingering around the corner, Ooredoo Maldives opted for a fun evening of football at the Henveiru Stadium yesterday.

The Football match was made even more memorable by the participation of our little members from the Fiyavathi Orphanage. The Maldives National Team also took part in this event and interacted with the children, providing them the opportunity to meet their favourite football idols.

A friendly match was played between 50 children of the Fiyavathi orphanage and 5 members of our National team. The young stars were no match for the National players and the match ended with a massive lead of 7 goals to nil favouring on our little team. The Managing Director and CEO of Ooredoo Maldives, Mr. Khalid Al-Hamadi also took part in the event along with members from the Ooredoo team. They played the match with the children from Fiyavathi.

The event was inaugurated by the Vice President of the Maldives, His Excellency Faisal Naseem and he observed the match as well.

As part of the anniversary celebrations, Ooredoo has also launched 5G services across the Greater Male’ region and introduced exclusive deals for all 5G customers.

Ooredoo Maldives have been enriching the digital lives of Maldivians since the beginning, and have made revolutionary impacts on the digital world. They were the first telecommunication operator to launch 4G network services across the country and the first to upscale its transmission network to full IP. Furthermore, they were the first Ooredoo Company to receive the 5G spectrum license in 2018, resulting in the introduction of 5G AirFibre and 5G Broadband services in the Maldives-a milestone brought to the telecommunication world.