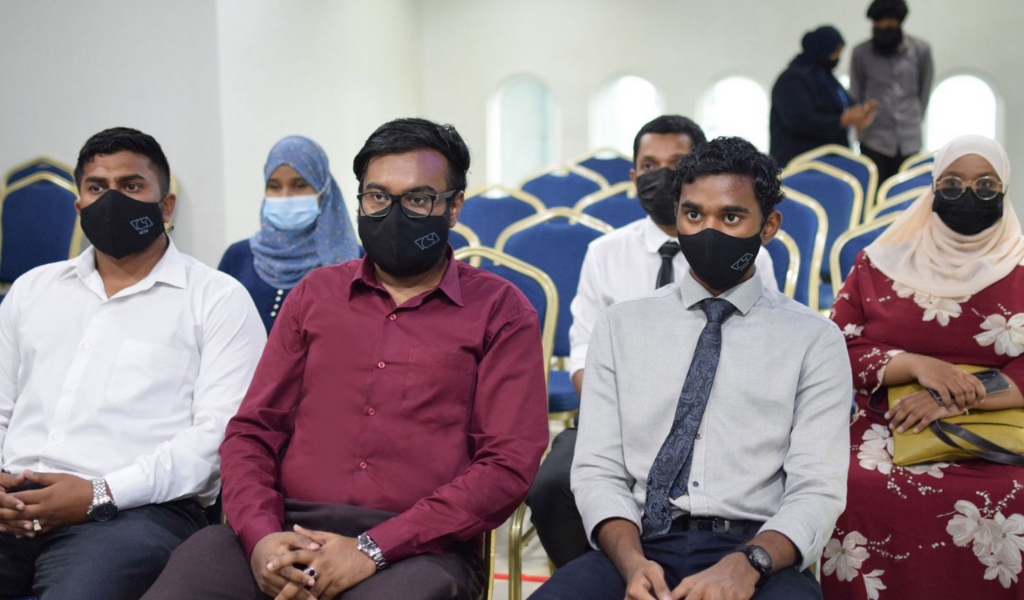 At a ceremony which was held both simultaneously (both physically and virtually) in QI Campus on January 22nd, 2022, the Villa College Student Association (VCSA) inaugurated their first-ever branches in the Atoll Campuses of Villa College. The Chief Guest was the Rector of Villa College, Dr. Ahmed Anwar, and other college executives, faculty deans, senior staff, campus managers, Student Representative Council of VCSA (VCSA SRC) and VCSA Chapter members of Villa College also attended the ceremony. The VCSA Chapters were inaugurated in Villa College Hithadhoo Campus, Kulhudhuffushi Campus, Naifaru Campus, and Laamu Gan Campus.

“Within a college/university, along with studying and completing a degree program, actively participating as members of a student association, will enable students to acquire the required student experience that a college has to offer. The Villa College Student Association is the biggest platform created in Villa College, to provide such experiences to its students,“ Dr. Ahmed Anwar –Rector of Villa College.

Mrs. Fathimath Shaina Representative of Kulhuduffushi Campus Chapter, delivered her remarks virtually during the ceremony and thanked the VCSA SRC members and Villa College management for their unwavering support to make VCSA Chapters a reality. She also assured them that the elected VCSA Chapter members will give their maximum effort to ensure that student experience in Villa College Campuses reaches new levels, all whilst increasing the student engagement in their respective campuses. She went on to highlight the importance of developing new connections by interacting with various students from different cultures, and creating long-lasting memories while achieving academic excellence.

“As representatives of atoll campus students, we are very keen on making a difference. The fact that we are being given a huge responsibility, I am sure that you all have a very high expectation from us. Insha Allah, we plan to deliver with the best of our capability, as I am happy to inform that we have already started developing the master plan of this year,” Mrs. Fathimath Shaina (Representative–Kulhuduffushi Campus Chapter)

Moosa Meekail Ahmed Jaleel, the President of VCSA also spoke during the ceremony and he congratulated the newly elected VCSA Chapter members and highlighted the significance of this occasion, as this the first time a student association registered under a college launched its branches in Atoll Campuses, in the history of the Maldivian higher education community. He noted on the dedication of the VCSA SRC members and the staff of Villa College in making VCSA Chapters a reality, and how important it is to take their role seriously, as they will now play a part in taking Villa College to the next level. He also urged the newly elected VCSA to make use of the opportunities that present themselves.

During the ceremony, a feature video was broadcasted that introduced the newly elected Chapter members of Villa College Student Association and provided valuable information regarding Chapters.